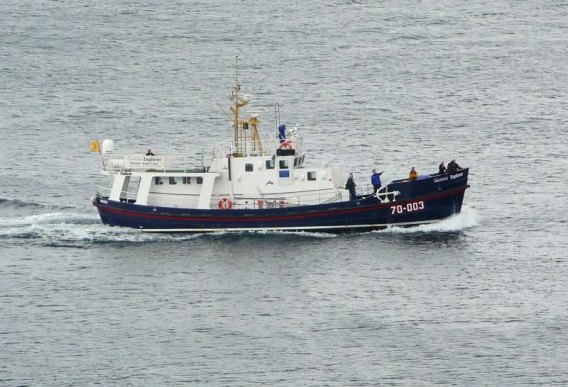 In 2001-2002 she had an extensive re fit at Buckie Shipyard with 3 additional cabins and 11 berths being formed along with a new galley and re configuration of the saloon area.

I purchased her in late 2003 and in 2004 she again returned to Buckie for more extensive work. Bulwarks were raised forward to give a drier deck. Rear wings and an upper deck were constructed to allow a vast deck area above the saloon. All deck areas were coated with Jotun Armour anti slip paint. The main engine exhaust was converted to a dry system and the outlets were brought up to radar height within the main array. Oil fired central heating was installed throughout working through wet radiators and a un vented hot water tank fed by a new Kubola oil boiler. A Fischer Panda automatic 9kva gen. set was installed along with a large (1.4 Tonnes) 24volt battery bank in the aft steering compartment working through three number 3Kw Victron inverters giving 12 hours of ship power at full load capability “off generator”. A new gen. set 20 kV was installed to the Secondary Port Caterpillar engine.  An Olex plotter system with sea scan was installed along with Simrad dual 50-200 Echo sounder both viewed through Neovo 15” flat screens in the wheelhouse. A Simrad  RS87 Vhf Dual hail system was installed along with a new Simrad AP35 Autopilot. In the saloon a 26” Flatscreen tv was installed with a Simrad satellite dome fitted astern. Gel main engine start batteries were installed Port and Stb totally independent of the new system fitted aft.

She is slipped every two years re painted and any work required is done without compromise. Oil changes are done without fail to the main engines and secondary Port and Stb engines. In the 12 years I have had her she has never let us down and she is a true go anywhere vessel admired wherever she goes. She is basically a “Little Ship” and her built quality is immense. Her range is at present 1700 miles. But she has a huge under deck capacity to double that easily by utilising un-used oil and holding tanks. She is constructed of Corten steel and ultrasonics have shown that she has diminished by 0.1mm since her build. She is currently classed as a cat 2 workboat and is half way through her 5 year audit via Mecal. All documents and papers are in order and all handbooks covering all equipment on board are available. A full set of drawings, some fifty in number are also supplied showing the complete vessel detail at every point.

Below Deck from the Bow-Aft.

Up two steps to wheelhouse through watertight door with locking dogs.

Headroom in engine rooms approx. 6’6” – 8’. Each engine room is fully independent by way of fuel supply, battery supply and can be switched to supply other engine room if required. Main fuel tanks under engines with day tanks worked through 24v pumps or hand pumps. At each side work benches and areas for storage in each engine room. Water pumps for fresh water in Stb room. Aft of main engines in Stb room is the Fischer Panda and the hot water cylinder as well as the central heating boiler. Intake and exhaust fans. Fixed air compressor above main engine. Fire fighting system above each engine and secondary engine. Watertight door through to Port engine room with similar layout. Secondary Cat engine working 20 kV generator and Gilkes pump for bilge and fire fighting purposes aft of main engine. Controls for bow thruster and steering motor work from hydraulic pumps from both port and stb engines. Aft mooring Dueer winch works from Port engine.

Back up Stairs to passageway aft two steps down into saloon.

Out through a six dog watertight door to Port side step down to deck. All handrails in stainless stanchions with heavy duty top wire rails. All round apart from raised bulwarks fwd and from wings to aft deck area. Solid double handrails here. Fuel fillers port and stb. Fire fighting hoses and outlets port and stb. Various watertight vents.

To fwd deck area. In front of galley accommodation is a set of three lidded watertight bins for gear stowage. Forward is the anchor winch twin drum twin chain with dogged clutches and rope drums port and stb. Haws pipe covers and covers for winch and winch control aft of winch.

Side decks are 1m wide. At aft area the Dueer mooring winch is situated.

To the rear of the accommodation eight steps to upper deck area.

One step up onto wheelhouse roof with centre mast array and twin exhaust pipes in marine stainless. Various Aerials and gps antenna.

All in all when writing this from memory after having lived with this boat for 13 years. She will never let you down. An absolutely solid built vessel. Will be extremely sad when she goes. She has been used as a marine wildlife watching vessel. She has carried out commercial surveys for marine mammal research as well as wind farm sea mammal research. From Wick to Aberdeen and covering the Beartrice array as well. She carried out these works for four years on monthly week long voyages. She is well followed and has a Facebook page or view her on line at www.Geminiexplorer.co.uk  This would make an ideal live aboard vessel by a couple to carry on and build up the client base working from her home port of Buckie which is an ideal wildlife watching base being accessible at all states of the tide.Or to be used as ago anywhere vessel. She has a dedicated band of followers who visit year after year. Ask to see the comments book just to see how popular she is around the world. She is a commercial vessel and as such fuel is duty free along with supplies etc 0 rated.

All in all she is a graceful lady built with great attention to detail and materials that have no compromise and the highest standards of construction have been used used throughout. She far exceeds Lyods A1 by way of build quality.

144 service launches and 44 lives saved is a fantastic pedigree. She is truly one of a kind.