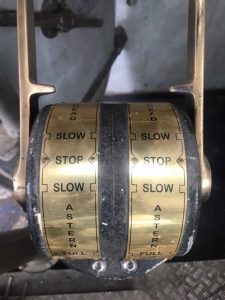 She is a Lifeboat with a rich and at one time a tragic history. She was officially named with great fanfare in 1972 at Henley on Thames by non-other than H.M. Queen Elizabeth 11, an illustrious start after which she served with the RNLI Relief Fleet up to 1978, before being stationed at Fraserburgh 1978 to 1979, Relief Fleet again 1979 to 1986, then she was stationed at Peterhead in 1986 (to replace ON1008 which was transferred down to The Lizard), staying there until 1988 and then back into the Relief Fleet until 1990 when she was sold out of service.

Post-RNLI she was purchased at some stage by drug smugglers, who when confronted by Customs off the coast of Scotland, set fire to the aft cabin which caused a gas cylinder to explode and tragically caused the death of a customs officer. The fire was extinguished but the aft cabin was badly damaged.

Luckily the boat was subsequently bought by the previous owner who meticulously set about rebuilding the boat with the superstructure from her re-cabined sister Solent, ON1014, 48-011, “The Three Sisters”.

Her current owner Danny bought Solent Class Lifeboat ON1013 earlier this year but now wants to concentrate on other projects so is offering her for sale at a very reasonable £10k and is keen to ensure that she goes to a good home.

She should be considered as an ongoing project that requires finishing off, be that the electrical system and ancillaries.

She has all the expected Solent Class Lifeboat specifications, Corten Steel plate on ribs hull, marine-grade aluminium superstructure with inherent self-righting by way of an 8-ton iron keel and watertight cabins. As one of the nine Mk1 Solents she additionally only has a semi watertight wheelhouse for self-righting purposes and will self righty with the wheelhouse doors open. She has the traditional RNLI helm arrangement with integral rudder position indicator and attached Sestrel compass binnacle. The aft cabin is bare for refitting but would have originally contained the radio and other communications equipment station and seating benches with storage.

The engine room is self-contained and contains the hydraulic capstan driven by the starboard engine. Battery charging is via two 24 volt alternators mounted ahead of each of the twin contra-rotating Gardner 6LX engines set at 110hp heavy-duty use specification. Both engines have been totally rebuilt by the previous Mechanical Engineer owner to exacting standards and refitted into the boat but will need all plumbing, electrics amd prop shafts connecting up. The engines drive through hydraulically operated Gardner UC mechanical gearboxes via 2:1 reduction boxes through stainless steel prop shafts to bronze 28” x 31.5” propellors, each propeller is accessible via an individual tube with cylindrical plug and locking lid for clearing purposes.

The prop shafts are lubricated with NEOX grease from individual manual pumps in the engine room and have an additional bronze bearings on the engine room rear bulkhead that are drip-fed oil from individual reservoirs. A full range of spare parts for the Gardner engines and gearboxes is available from Gardner Marine Diesel and other suppliers so should ensure continued reliable service for the decades ahead.

The engines and gearboxes are cooled by independent Serck heat exchangers mounted each side of the hull below the aft cabin in a compartment with the reserve fuel tank. The heat exchangers operate via a water pressure/venturi principle as the hull passes through the water so no pumps or impellers are involved, a robust and reliable system.

The steering needs the prop shafts re-connecting and is the original Mathway manual system that takes its drive via the aforementioned shafts, to a bevel box and the main steering box in the aft steering compartment where a drop arm transfers the motion to the twin spade rudders which are individually supported in bronze tubes with large roller bearings and bronze upper thrust bearings. The rudder tubes are sealed via a graphite greased packing gland.

The main fuel tank of 180 gallons is built low across the hull, below the deck of the fore-cabin ahead of the engine room, an additional reserve tank of 58 gallons is mounted in a compartment below the aft cabin. Both fuel tanks should linked by a 2-way electrical fuel transfer system and the engines will run on either tank via a valve system. Fuel consumption at 7kn is approximately 3 gallons per hour across both engines, at full speed (9.25kn) fuel consumption is approximately 5 gallons across both engines. In RNLI service these boats were operated on the basis of a 250 mile maximum fuel range.

The engines have CAV electrical starter motors with an additional emergency manual handle starting system. Each engine is equipped with a mechanical bilge pump that is linked via a valve equipped manifold to various compartments in the hull, again these require connecting up.

The fore-cabin originally contained a separate heads and the anchor rope mounted on its reel plus additional items.

As the seventh of only eleven of the steel-hulled, traditional double-ended style, Solent Class Lifeboats built, ON1013 is a rare opportunity and would make a superb self-righting, traditional Historic Lifeboat and with suitable considerations in the fit-out, would offer comfortable accommodation in an immensely seaworthy and safe all-weather cruiser.