An extract from ITV’s “The Royal” 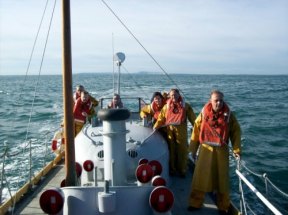 Quinton served with the R.N.L.I. as a crew member for 18 years, standing down while holding the post of second or deputy coxswain some years ago .

He has sailed extensively around the coasts of Britain and Ireland , on lifeboats, fishing trawlers and private yachts both in command during deliveries and as crew.

The Guy and Clare Hunter has appeared in several TV productions  and Quinton has provided classic boats for TV and film companies throughout the UK.

Some stills from an Episode of “The Royal” TV series where ths storyline required the staff from the hospital to be delivered to a Pirate radio Station by Lifeboat.  Set in the 1960s Quinton assembled a crew and boat for the filming.