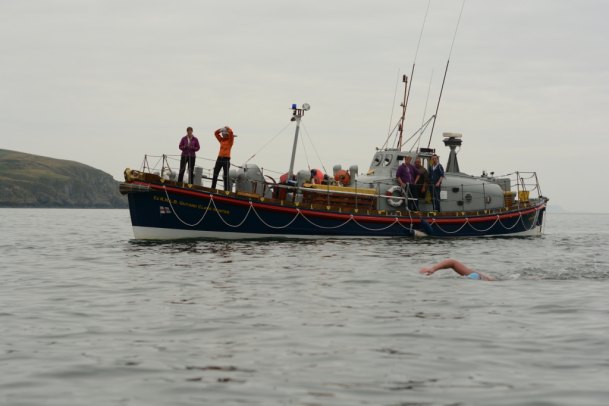 Michelle Macy USA, about to finish her record breaking North Channel swim in 2013

I would urge all aspiring swimmers who are contemplating the North Channel swim in the years ahead to make contact with me in the first instance as soon as possible. As their North Channel Swim Pilot I will help in very way I can to plan their attempt.

Myself and my crew pride ourselves in providing a very personal approach to your swim with as much help and guidance as we can, throughout the preparation and the big day.

The North Channel sometimes called the Irish Channel is the body of water between the east coast of Northern Ireland and the immediate west coast of Scotland and is world renowned for being the accepted pinnacle in open water, long distance swimming, due to the contrary currents, unpredictable weather, jellyfish and not least, the coldness of the water, where even in high summer temperatures may reach a balmy 15c ( 59F ) at best.

The North Channel swim is one of the Oceans Seven challenge and widely considered, the hardest. 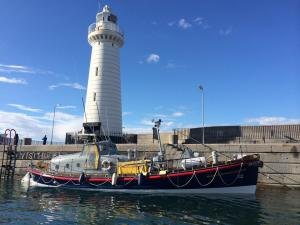 The “approved” north channel swim covers approx the 18.9 miles between Donaghadee in Co-Down and Portpatrick on the Mull of Galloway coast and can be attempted in either direction. No swimmer has yet conquered the channel in a two way attempt.

Swimming was first tried here from the 1920’s by the famous Mercedes Gleitz, but it is really in recent years with the advent of Oceans 7 that the North Channel swim, considered by many to be the toughest of the 7, has seen the upsurge in swim attempts.

No doubt many more will try, not all will succeed. There is no shame in not making it.
The swim season is very short and in reality can be confined to July and August with the possibility of some days in early September and in recent years, some dates in late June as the waters warm up…
I have been a pilot among other commitments on the North Channel for more years than I care to admit. My first success was with Margaret Kydd from Scotland way back in August 1988 when she was and still is, the youngest female swimmer to accomplish the challenge and only missing by a day, being the first female swimmer ever to cross the North Channel.

1989 saw the legendary Kevin Murphy complete the Scotland to Ireland swim. Other business and marine commitments (Surveys, Film work, Lifeboat Restoration etc) took me away from the swimming for some years but recently I have been “called back”.

Over the past 3 years I have piloted swimmers who’s times have slashed long standing records.

Other equally fantastic successes by:

No doubt in the future these record times will be surpassed again and again.

The swim has been commented on recently as “becoming easier”, possibly due partially to the upsurge in the successes we have had. It is not easy, swimmers will know better than me the effort that is required, to accomplish any open water swim, the pain to be endured only overcome by the elation on a success.

Being involved with so varied a group of swimmers in recent years has proved to me that 49% of the effort needed to have a success is down to training and stamina.

Training in cold water for this swim is vital, its not rocket science, it doesn’t particularly require anything special, OTHER than this one thing that is necessary to bring any chance of success, swimming for hours in as cold water as you can bear for as often and as long as possible, right up to the days before your attempt.

I would advise all aspiring swimmers to get here as early as possible and acclimatise in the local waters.

The average sea temperatures a swimmer can expect on the North Channel over the summer vary between 11c and 15c, however in 2014 we had late July and early August temperatures of up to 18c, positively tropical.

Stamina. Before accepting a swimmer I will ask questions on performance.
All will be expected to maintain a minimum speed for up to 12 hours on average, which can complete the swim.

I am convinced the balance of 51% of the effort needed to complete the swim is in the mind of the swimmer. We have had swimmers with excellent swim credentials come and try the North Channel, we have given them excellent starts with full offshore tidal advantage, superb hot summer days with glass calm sea, negligible jellyfish interference and yet perhaps only a few hours into the swim, some could not go on. I say again, there is no shame in not making it.

Routes. and where experience counts.

Ireland to Scotland is the preferred route and has been completed in 9hrs 34 min. The general average is between 10 and 13 hours.

The route we use is not new, it is simply a variation on the old seafarer route between this part of Ireland and Scotland when fishermen used sails and oars combined with the power of the tides to get across.

It has been emulated by others with modest success as the modern GPS shows the world, my record shows how to “tweak” the route hour by hour to full advantage.

Good weather is vital, I will not start a swim if the weather forecast is not as ideal as it can possibly be.

The Scottish coastline is sheer, barnacle encrusted jagged cliffs with a few inlets and just one very small sand beach so the swimmer has to be prepared to touch the rock and return to the boat, hence the reason why good weather is vital.

It takes very little onshore wind to make the coastline uninviting. I can think of nothing more soul destroying that starting off and making it across only to be deterred from a landing by rough waves breaking against the shore. This is where the experience and knowledge of 40 years on the North Channel pays off.

The Scotland to Ireland route is the more difficult 2nd choice route and takes on average a minimum 17hours with a very very limited chance of landing, again, against a rugged shoreline, due to continuous contrary tides on the Irish coast.

The North Channel Swim swim is becoming more sought after as the years progress, there is only 1 other professional North Channel Pilot pilot besides myself and he traditionally restricts himself to 3 or 4 swimmers per year as he does other things with his boat.

I have a boat and crew dedicated to the swims and can take every available tide window, to allow as many swimmers as possible in each season. No doubt there will be other pilots in the future, at the moment there are no others with a proven track record or the all too important local knowledge and experience.

I would urge all aspiring swimmers who are contemplating the North Channel swim in the years ahead to make contact with me in the first instance as soon as possible. As their North Channel Swim Pilot I will help in very way I can to plan their attempt.

I will advise you what is expected of you. I will tell you what I can do for you, and between us we can decide on the best slot available to make your dream a reality and add your name to the North Channel Roll of Honour.

For those who have read this article and are thinking, he hasn’t mentioned a 2 way swim. I have been asked repeatedly about the possibility of a solo 2 way attempt.

Personally, I do not think it’s possible, for a number of reasons, mainly contrary tides and having seen the effects of a one way on the strongest of swimmers taking up to 12 hours, I consider a return attempt that could take a further 24 hours for a weakened swimmer, would be at best foolhardy and at worst downright dangerous. Having said that, someone is going to insist on trying it.!!

I am happy to talk to aspiring swimmers about the North Channel swim and our North channel swim pilot boat services.

All the swimmers I have piloted are well known in swim circles and will also be happy to recount their experiences and share any advice they can.

All swimmers intending to attempt the North Channel are advised to contact the pilot as soon as possible and book a swim slot for their intended season, preferably well in advance, as the swim season covers late June, July and August to mid September only.